Thermically decomposed residues of the flux are in principle unavoidable with soldering processes which use flux. This is normally not important as long as qualified flux is used. There is, however, the risk of local flux accumulation at insulated areas. And contact areas are also under constant risk.

Description:
Wrong flux application or removal results in dark residues on the board as well as on the solder joints in most of the cases. Boards which have not been cleaned directly after soldering can show dark (brown) residue. Strongly activated fluxes can also cause brown dicolouring and etching. 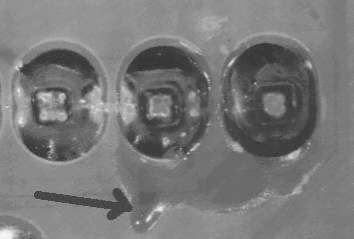 Description:
Light (white) residues of organic nature can often be found after soldering and/or cleaning the PCB. Fluxes on rosin basis facilitate the removal of residues. . The white residues are mostly caused by layers still adherent before soldering. In fewer cases they are due to the flux only. Incompatibility between flux and solder resist can also lead to such residues. The ageing of the assembly (cracking of flux residues, water absorption) can also make residues visible (flux on resin basis). 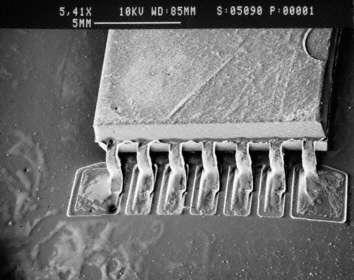 Source:
SEM
Do you have problems with flux residues ?

Our analytics team can help you find the cause.

go to failure analysis at TechnoLab